Clau and I both had a week off for the Easter holiday, and I was seriously itching to travel. I always feel this way in the spring because of American spring break – most people get a week off during this time period and we usually use it to go to the beach or somewhere fun.

From the dock of our hotel

I had been researching cities and travel sites since February, trying to find an affordable place for us to stretch our legs, but no dice. Everything was expensive because lots of people travel during the Easter holidays. 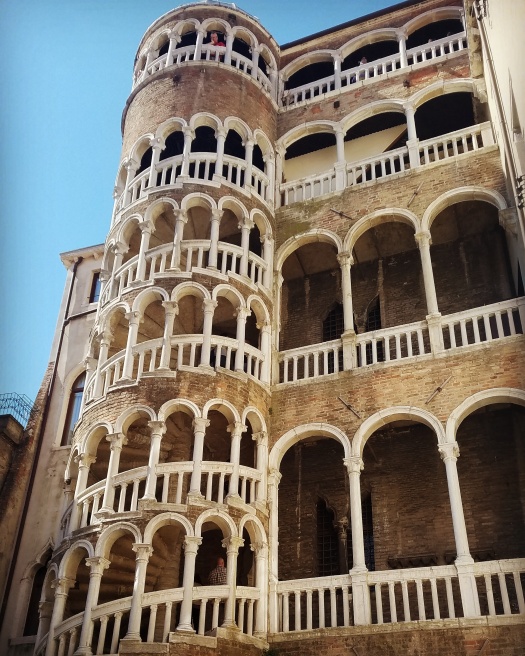 This staircase earned their family the last name of “Snail”

However(!), Wizzair had a sale where all of their flights were 20% off. One of the cheapest flights they had was to Venice, so it made sense to me to take advantage. We used Booking.com to find a decently priced hotel and it was settled.

From the Bridge of Sighs looking out towards the Venetian harbor

We left for Venice on Easter Sunday. Very early. OTP is 2 1/2 hours away and our flight was supposed to leave by 6:30, so we left Brasov at 12:40am. We did our sleeping on the minibus and the plane. It wasn’t really so bad that way. After we got to Venice, we walked to our hotel and our room was ready, so we took a short nap before venturing out.

Wow. What a city. I am always super impressed by European cities in general. Everything is old. Like, really old. Hardly anything in the United States is old, and if it is, then it’s from the 1800s or something. With the exception of Boston, New Orleans, or Savannah, you’re not going to see too much that’s older than that. So, when I see buildings from the 1500s, I can’t believe my eyes. They don’t fix up the buildings either, so all the patina you see is authentic and from centuries of sea breeze.

There were a lot of tourists, of course, and we tried to see the favorites (Doge’s Palace, St. Mark’s Square, Grand Canal, etc.), but I found the most enjoyment out of seeing the less crowded residential neighborhoods and getting lost in the maze of bridges and tiny streets. It’s also somehow comforting and life affirming to see Venetians hanging out their laundry to dry as they’ve probably done for hundreds of years.

No doges allowed in the Doge’s Palace.

We took two free walking tours. One was a five hour tour that took us to all of the major sites and gave us some helpful tips on the city (how to bypass the lines and great places to eat). The second tour was shorter, but the focus was more on showing us the non-tourist spots and their significance to the Venetian people.

Original Lady GaGa: Venetian women walked on these platform shoes to keep their dresses from getting dirty.

Interestingly enough, neither tour was conducted by a Venetian. Apparently, they are pretty pissed about the whole “free tour” thing because usually they can charge 35 euro a head for a one hour tour. The thing is, the free tour is a great idea. You are under no obligation to pay anything. However, if you get great tour guides like we normally do, you feel like you want to pay them. With a great guide, you know you are getting the value of your money and you decide how much it is worth to you. If I had to pay 70 euro for a one hour tour, that guide had better be doing cartwheels trying to impress me 😛

I was very happy that I had used TripAdvisor beforehand to find places to eat. We were on a budget, so I made a point to locate the best “cheap” food that wasn’t McDonald’s and I put the locations on a Google Map that I downloaded to my phone. I was able to access the map with the locations despite not having a signal or WiFi and it helped us out a lot. 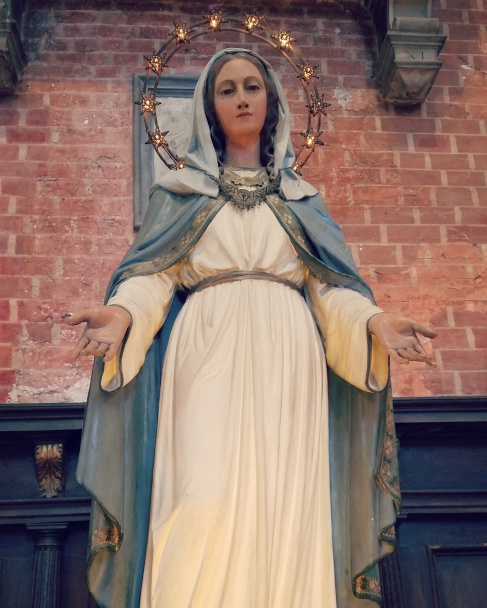 Inside one of the many churches in Venice

We took one day to travel out to two of the islands in Venice’s lagoon: Murano and Burano. Murano is famous for its glass making and you can watch them do glass blowing and other neat things, but I think I enjoyed Burano more.

Making glass with a cigarette hanging out of your mouth…how very Italian?

On Burano, they are famous for lace and also the colorful way they paint their houses. I felt like I was on a tropical island. Also, it wasn’t nearly as crowded as Venice or Murano, and it was much more relaxing.

The last night of our trip, Clau took me to the Rialto Bridge on the Grand Canal and proposed. I said yes 🙂 So now, we have an even sweeter story to tell that begins with our Venice trip (and maybe ends with a Vegas trip? Who knows! lol).

After spending all the time in the Venetian sun, we returned back to Brasov where it was snowing. Y’all. I am not talking flurries. It was like a blizzard. I think we had a foot of snow in two days. Thankfully, it is all melted. But nothing is stranger than being sunburned and putting on your parka and snow boots.

Louis was very excited to run around in the snow

I would go back to Venice again, for sure. I would like to see one more of the islands (Torcello is largely uninhabited, but the 1000 year old church still stands) and maybe do some shopping. Obviously, this is in the very distant future because I don’t foresee having money for that kind of shopping anytime soon. I hope someday I can purchase some of the Murano glass and a handmade paper mache mask for our home 🙂

Here’s the video of Venice I made using Google Photos: