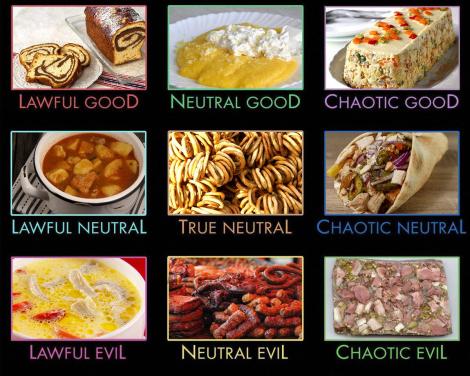 I have written a bit here about desserts and snack foods, but I have neglected to tell you about the wonder that is traditional Romanian food. I was reminded of this when I saw the image above and realized that before I came to Romania, I would have had no idea what any of those things were. So, here’s a run down for you 🙂

Lawful good: Cozonac. I adore cozonac. It’s a dessert bread (woohoo, more dessert) that you can fill with different things. Traditionally, it’s a walnut filling, but you can also find cozonac with cacao or Turkish delight in it.

Turkish delight in cozonac is…not good. Honestly, I think it is gross. Try it if you must, but I think you will regret it – in Romanian, Turkish delight is called “rahat” which is translated in English as shit. No, really. That’s the actual name of it in Romanian.

The lesson here is, stick with cozonac cu nuca (with walnut) and everything is good. I like to make American style French toast with it because it soaks up the liquid really good.

Neutral good: MĂMĂLIGA. I love love love this stuff. Technically, it is just polenta, but wow, if you can get this stuff cooked by someone’s Romanian mother, it’s like heaven. It’s dear to my heart (as someone from the south) because it’s almost like grits. But better. So much better. Slap some sour cream on it and it’s a meal. In the picture above they’ve added branză – which is kind of like a cross between sour cream and cottage cheese in the states.

Chaotic good: Salata de Bouef. In Romania, this dish is typically reserved for special holidays. Think of American Tuna Salad, but with beef. There are many variations on this dish, but like most Romanian meals, the one your mother makes is the best.

Lawful Neutral: Tocană de Cartofi – this is a beef and potato stew, similar to goulash. It’s tasty and filling. A nice, easy dish to make in the winter. Here is a recipe in Romanian – you can use google translate to help you out.

Chaotic Neutral: Shaorma. I never had shaorma until I came to Romania. I remember that it was mentioned at the end of one of the Avengers movie and Thor was eating it, but that was my limited experience with this food. I came to Brasov and it. was. everywhere. People here love these…sandwiches? gyros? I think it’s because it has french fries in it? I have no idea. I always end up picking out the french fries and eating them separately, so I guess I am not the target audience for shaorma.

Lawful Evil: Ciorbă de Burtă. There are two kinds of people in Romania: those who like Ciorbă de Burtă and those who don’t. This is a creamy garlic beef stomach soup. I tried it once in Sibiu because I was forced. It tasted like garlicky grass water. No, thank you 😀 That being said, some people love this stuff and eat it often. You can find it at any Romanian restaurant.

Neutral Evil: Grătar. This is kind of an umbrella term for prepared meat products. These range from awesome (mici!) to wtf (sângerete aka blood sausage). Romanians love the heck out of their smoked meats. Just go to any supermarket and check out the length of the salami aisle. You can also buy almost any variation of sausage at the deli counter. I have written about the “Romanian Grill” before – it is an essential part of the warmer months in this country. Pack up some sausages (including mici), some beer, your friends, and your trusty iron grill into your Dacia, and you’ve got an all-day chill as heck party. Bonus points if you find a grill spot next to a creek or river.

Chaotic Evil: Toba. Toba is a dish made with all the parts of the pig and suspended in aspic (beef jelly). I’ve never tasted it because I can’t get past the way it looks (I have been trained by Jell-o to think that all jellies should be sweet).

This list is not all-inclusive of traditional Romanian foods (hello, where is the sarmale?), but I think it’s a good place to start. What are you favorite Romanian foods? Tell me in the comments so I can try them 🙂

5 responses to “A Primer on Traditional Romanian Foods”