Euro 2016 is upon us and the world has gone football crazy. For my American friends, imagine the SEC football games where the state teams play each other (like Auburn/Alabama or UGA/Tech). People. are. psyched. There are huge sections of every store that have “HAI ROMANIA” products you can buy.

Of course, I bought most of them because I love that sort of thing, and why not? Lidl had a ton of stuff: a 2-pack of tank tops, face paint, a lei, and some wristbands cost me barely anything and now I have all the best Romania swag 🙂 Let’s go team! Do the thing! Get the points! Sports!

I didn’t buy these chocolate soccer balls or players, and I kind of regret it. They remind me of my chocolate snowman from Christmas, Frederick (RIP).

Romania: where even the beers play soccer!

We played three games – France, Switzerland, and Albania. We lost to France and Albania and tied with Switzerland. Even though we won’t advance in the competition, I had a really great time cheering on Romania and getting caught up in the national pride. I even learned the rules of soccer (football) which was finally explained to me on Sunday – it’s more than just running back and forth on the field 😛

The Romania/Albania game was very intense. Both teams played very aggressively – one player was injured enough to be carried off the field in a stretcher. I couldn’t sit for the entire game, I had to get up and walk around the room a bit. And by walking around the room, I mean pacing. I had anxiety! and stress! I’ve seen about a million American football games and baseball games and I’ve never been so worried about a game. So now I get why people get really riled up about this sport – for the first time ever, I was really invested in the players (and all their mistakes – lol). On a side note, soccer games are a really fun way to learn Romanian curse words.

I don’t think I’ll watch any of the other games of EURO 2016, but I am interested in going to some local FC Brasov games. 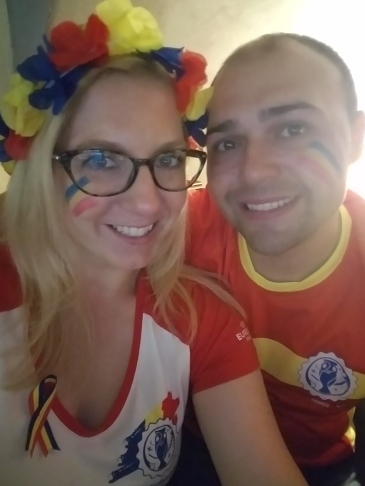