I had been planning on going to the Color Run in Timisoara (in the west of Romania) since February. I had my hotel booked (non-refundable because it was much cheaper) and I had my tickets to the race. I even blogged about it back when I bought the tickets. Needless to say, I was excited about it. I am a sucker for a 5k. Then the weekend before the event, I saw a commercial for the race and realized they had changed the date to the week before. Thanks, Color Run.

We decided to go to Timisoara anyway because I’ve heard it’s a lovely city and I don’t really need an excuse to visit a lovely city. Also, who doesn’t love a road trip?

On the way to Timisoara, we detoured to Castle Corvinilor (Corvin Castle) in Hunedoara. 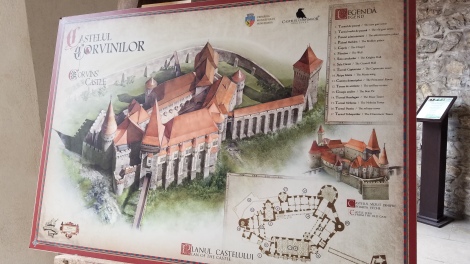 Allegedly this castle was the inspiration for Disney’s Cinderella Castle. After visiting, I can definitely say I felt like Cinderella might have really enjoyed this castle in its heyday.

For starters, it’s huge. The entire thing is massive – tons and tons of rooms. There are staircases that lead to other staircases. I think there are at least five or six levels to the whole thing. Each of the towers has an amazing view of the countryside.

You can still see some of the old paint on the edifice and the roofing is magnificent. It makes you wonder how someone in the 1500s was able to get on top of those towers, though. I’m not saying it was aliens…but it was aliens. Just kidding. I’m sure they had some kind of ingenious system of hoisting stuff up, otherwise they wouldn’t have been able to engineer this behemoth of a building. 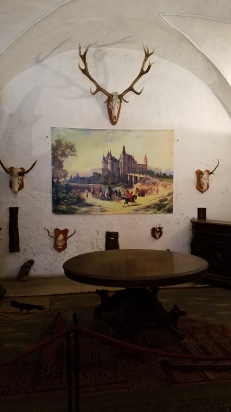 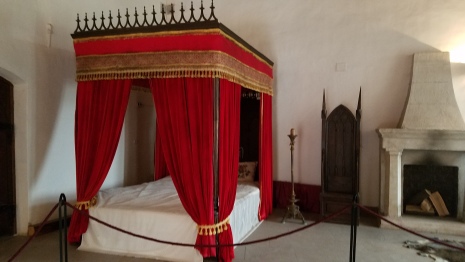 After touring the castle, we felt a bit peckish so we ended up getting some treats made fresh outside before heading out to Timisoara. Honey cake and apple pie, Romanian style. Omg.

Then we were off to Timisoara! 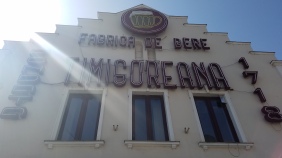 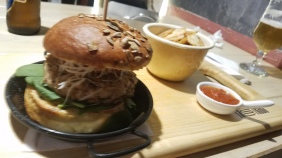 Timisoara was hot. I think it was at least 90 degrees there. This isn’t really anything marvelous, but keep in mind that not a lot of places have air conditioning here, so you really just have to deal with being sweaty all day, every day. 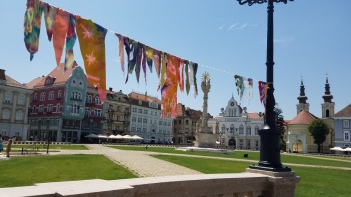 We had dinner that night at a burger place in Unirii Square that served all different kinds of meat burgers (I had a buffalo chicken burger – amazing). We walked to the Timisoreana Beer brewery, but alas, they do not give tours 😦 Instead, we walked around the city center. We had to go at night because that was the only time it was finally cool enough to breathe.

The next day, we set out to tour the city. We started at the Revolution Memorial Museum. We watched a long-ish video on the events and days leading up to the revolution of 1989. I hadn’t realized that the revolution started in Timisoara and that it had a lot to do with the government’s repression of religion. If I recall correctly from the movie, people were protesting the eviction of a priest – the government had promised that he could stay but decided to throw him out anyway. That didn’t sit well with the people and thus began a series of events that snowballed into Ceausescu’s downfall.

Many people lost their lives in the revolution, and I think the museum did a good job of paying tribute to the fallen heroes. 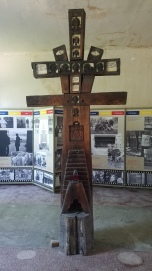 One of my favorite parts was the flag room where they had actual flags used in the revolution on display. The Romanian flag with the Communist emblem cut out was the most powerful symbol for me.

They had another room with artwork inspired by the struggle of the people for freedom – again, very moving symbolism. I think the art captured the anguish of a people tormented and repressed by their government and the lament of the loss of the lives of the martyrs, many of whom were young people. 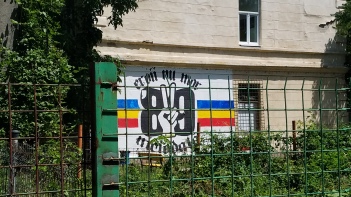 The museum also had a piece of the Berlin Wall on display. Overall, the memorial was very moving and really helped to make history more concrete for me. I was alive in  1989, but I was nowhere near being old enough to be  cognizant of current events.

After the memorial, we walked around other parts of the city. We visited the Timisoara Orthodox Cathedral. I know I keep saying how beautiful these cathedrals are – but if you could see the churches here in Romania, you would totally agree. They put a lot of money into these places and it shows – everything is gilded and filigreed. 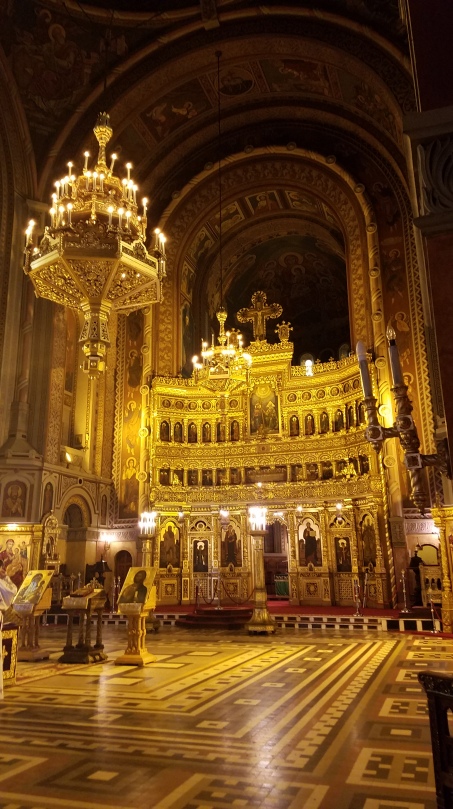 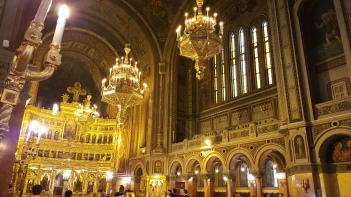 I was excited to see a wedding inside the church. Claudiu explained some of the wedding rituals to me that are different from what we have in America. For example, there are separate ceremonies – the city hall where you actually get married, the church wedding for close relatives, and then the reception for everyone (usually hundreds of people). There are wedding crowns to signify that the man and wife are the king and queen of the home. There’s even a tradition of kidnapping the bride from the reception and holding her for ransom. Also, it’s bad luck for a bride to see another bride on her wedding day. A difficult feat because on any given Saturday, there are brides everywhere. 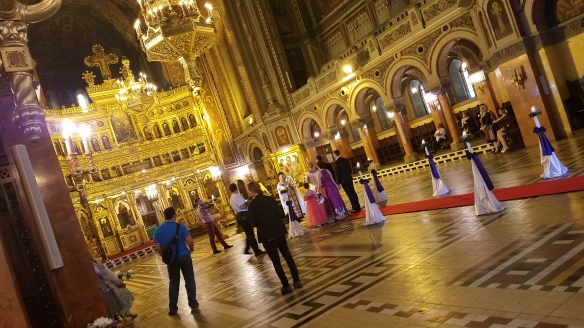 We took a walk by the Bega River and checked out the Rose Garden. Unfortunately, all the roses appeared to have given up on life because of the heat and the “garden” was mostly brown. I don’t really blame the roses, I would have done the same. 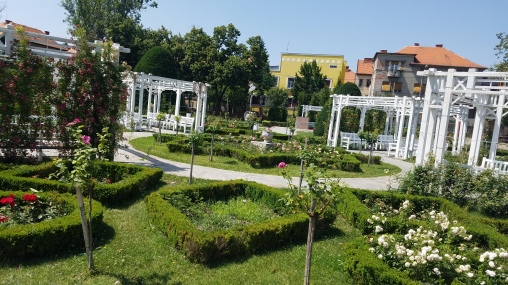 For dinner we went to Iulius Mall and tried some Mexican fajitas. Possibly the best interpretation of Mexican food that I’ve had here – just missing the key element of cilantro. Unfortunately, my cilantro plants were back in Brasov, but it would’ve actually made the meal pretty authentic.

Overall, I was pretty impressed with Timisoara. The city itself is beautiful and easy to navigate. They’ve done a great job integrating the old buildings with the new. It has a very “western European” feel to it – and definitely more cosmopolitan than other cities I’ve visited in Romania. I’m not sure I’d want to live there because it is a large city, and I really prefer a city like Brasov. Brasov doesn’t have a lot of universities, so our population skews a little older. Basically, it’s a lot sleepier here and I kind of prefer it 🙂 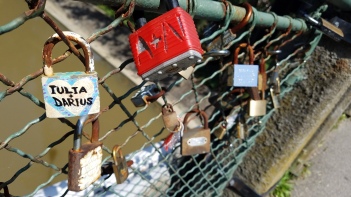 At the end of our time in Timisoara, we decided to continue on to Budapest since it was just a few hours’ drive away. We had so much fun in Budapest I had to break the post into two, so I’ll have those for you soon. Spoiler alert – Budapest is AMAZING.