The politics in the Romania government have been very interesting as of late. The Romanian President, Klaus Iohannis, has spoken out publicly against the opposition party (PSD) and its party leader, Liviu Dragnea because the PSD has made some pretty shady moves this past month.

A few weeks ago, we started hearing about the new laws and changes that the PSD wanted to make in the government. Some were okay (free train tickets for students) and some were absolutely unbelievable. For example, a person working for the government can steal up to 50,000 euro without punishment. This is great news for a lot of criminals, including Mr. Dragnea, who was under investigation for stealing about 30,000 euros. The law was (obviously) wildly unpopular because it basically decriminalized corruption, which Romanians have been diligently trying to fight for years.

The law was passed in the middle of the night while we were all sleeping.

We woke up feeling outraged, like someone had stolen something from us. Pride? Dignity? A prosperous economic future in the European Union? Romania wants to enter Schengen, will they let us enter now that our country has legalized stealing?

The move by Dragnea and PSD was immediately censured by the international community. The Romanian people were also moved to action – and went to the streets.

This doesn’t translate exactly – something like “Please, forgive us – we don’t produce as much as you steal”

This is where I chose to get involved. I am a legal, tax-paying resident of this country. I also love Romania and what it stands for – I couldn’t keep myself from joining the crowd and chanting, “Nu vrem sa fim o natie de hoti!” (We don’t want to be a nation of thieves!).

Protests in Bucharest drew up to 250,000 people

As of right now, I have heard that the government will repeal the law, but people are still suspicious. I’ve heard others say they won’t stop protesting until the PSD government steps down. We’ll see in the next days and weeks what will happen, but I am so proud of Romania and her people. Democracy is here, alive and well. 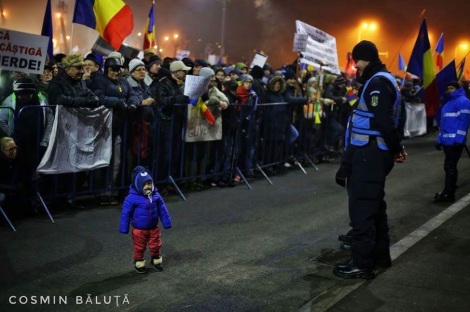 Teaching the next generation about the voice of the people 🙂

The protests themselves were mature, peaceful, and poignant. In Bucuresti and Brasov, people brought their children to make signs and march. It’s so important to pass on the values of democracy to the next generation.

Here is a video from the protests in Brasov (taken from a few different nights):

Further reading on the protests (in English):

Time Magazine (Feb. 6): Everything to Know About Romania’s Anti-Corruption Protests

New York Times (Feb. 5) – Romania Protests Simmer despite promises to back down

One response to “Protests in Romania”