Brasov has a zoo. Who knew? It’s kind of out of the way, at the outskirts of town, but it’s a legit zoo. Lions, tigers, and bears. The price was right, so went went exploring. 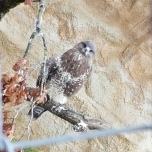 It was cold that day, but we took our time walking around the exhibits. Some of the animals were very friendly, and they came up to us and hung out. One guy was really enthusiastic about being friends…

I think we spent the most time with him. He seemed really lonely. But maybe that’s me anthropomorphizing again. I liked that you could really close to some beautiful creatures.

“I should’ve bought a boat.”

…and then maybe it’s just me, but even though many of the animals seemed very friendly and docile, there were just as many that wanted to kill us. 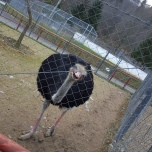 I will say that the zoo was appropriately sized for the city. Brasov is a bigger city, but it is not a metropolis like Atlanta, and I am used to seeing the resources a sizeable city has to offer the animals. Like bigger habitats, more animal friends, etc. Now, I am not a PETA activist by any means, but I felt bad for some of the animals that seemed like they deserved more.

This bear had a decent size habitat, but not many places to play or hide. I didn’t see a companion animal. He was pacing back and forth in this area and it made me feel kind of sad. Maybe I was just imagining it, but I know there is a bear sanctuary in Zarnesti, so I’ll ask them about it when I go. They probably know a bunch about bears in captivity.

I loved spending time with Claudiu at the Zoo, even though we were freezing our butts off. Here are some of the other animal sweethearts we saw: 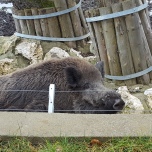