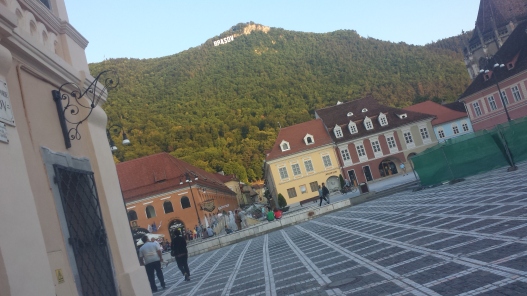 In Brasov, there is always one way to know where you are – find Tampa mountain. For those of you who don’t know what that is, it’s the big mountain in the middle of town that has a Hollywood-style “BRASOV” sign on it. Some call it pretentious, but I absolutely love that sign. Rumor has it that is was originally an art project done by some local students and that they just left it. Others might try to copy it (ahem*COUGH*rasnov*COUGH*), but ours is the best 🙂

Anyway, you can always look up and find that dang mountain and suddenly you know where you are. It’s a unique landmark that You can also walk up it.

I had a free afternoon and I decided that since the weather wasn’t excruciatingly hot, I would attempt the trek. The weather has been very hot this summer, and I’ve been avoiding the day moon as much as possible. I’m glad it’s a little more temperate and I can venture out during the day. I bought a chocolate covrigi from Gigi’s and headed out. 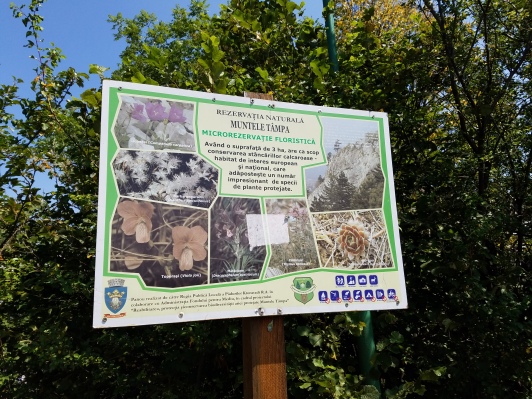 The trail takes about an hour to get to the top and while it’s not that strenuous, the trail seems to be in some disrepair and in places, treacherous. I had the pleasure of going up Tampa three times last year, and I can tell you that there has been some serious erosion since last year. I question the safety of the trail, but then again, Romania’s motto seems to be “it’s safe enough!” aka, don’t be a dumb ass and you won’t die. Maybe. 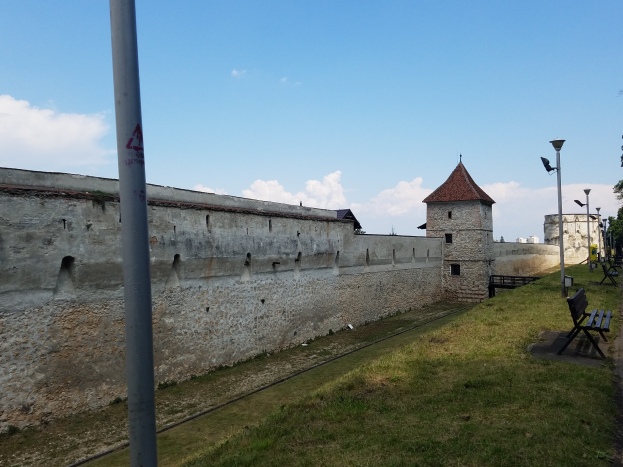 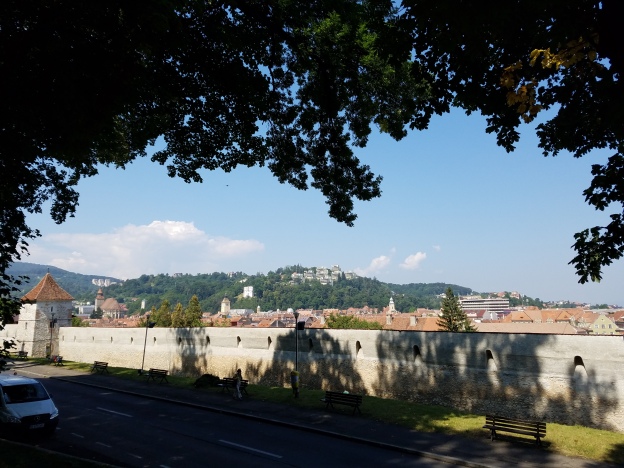 At one point in the trail, there is a steep drop off on one side and a high incline on the other – and a tree going over the trail. Now, it’s not a big tree. It’s small enough that you’re thinking – is this going to slide down the hill when I go over it? I contemplated going under, but there’s just not enough space. I’m not the tallest person, so I kind of shimmied over, but the whole time I was wondering if I was about to win a Darwin award. I guess they could, I don’t know, cut the tree (?!!), but instead they actually BLAZED a trail marker on it. On the tree that was blocking the trail. Like I couldn’t tell this was the trail. This is the only way to go – over the tree! 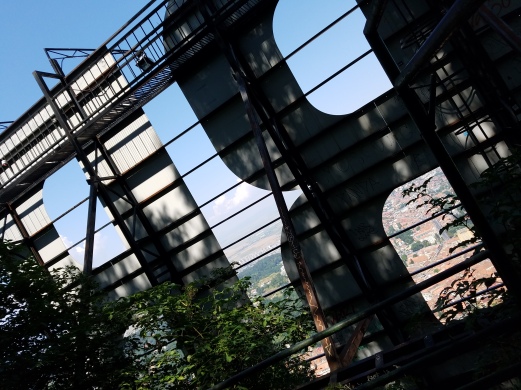 That’s the end of my rant because once you reach the top, it’s so beautiful you forget the trail completely. There are actually two overlooks – one is behind the BRASOV sign and the other is just a little farther (further?) up the mountain.

Can you spot the Black Church?

The more popular overlook is definitely the one behind the BRASOV sign. The day I went on the hike, the platform was totally packed. Now, most of these people did not walk up the mountain. If hiking isn’t your thing or you just want to get a good view without getting sweaty, you can take the cable car up. It’s about 15 lei up and down, I think. A one-way ticket (either up or down) costs 10 lei. I took the cable car down because I am not very coordinated and since I lack grace I thought I would fall going back down the trail. 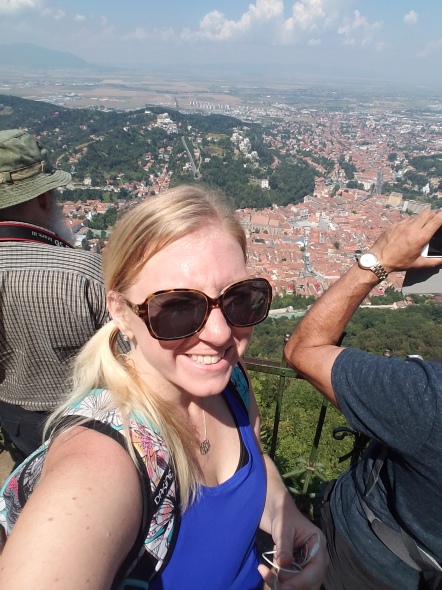 The day moon – it burns!

I digress. I finally got a chance to get to the front of the platform and check out the view. I love seeing all of the roofs and the streets from up high. Sometimes you see things that you didn’t know about, like a cool graveyard, and now you have something new to explore. 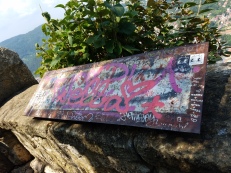 It’s neat to see big structures like the Black Church looking so small. It’s also cool how the sound carries up the mountain. You can hear kids screaming and dogs barking up there. 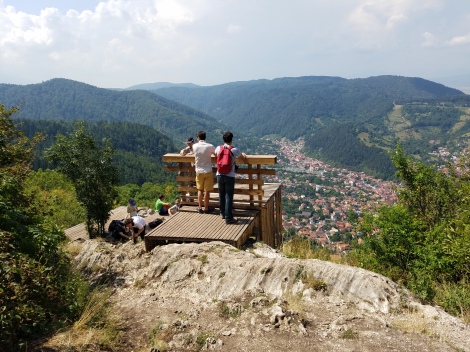 Going up to the other overlook, I noticed they had built some new platforms. I was really happy because I could actually get a better view than last year, and I had a good place to sit and eat my covrigi (Romanian dessert circle pretzel-thing). You also kind of feel like the King of the World. 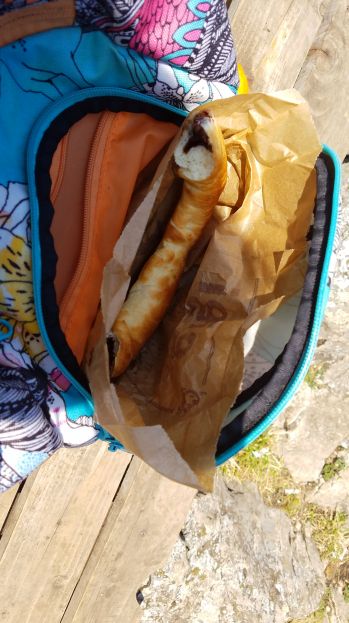 I sat up there for a while before I heard thunder and I could see the clouds rolling in over Postavarul (in Poiana Brasov). I decided it was time to get down the mountain, so I hopped on the cable car and rode down. I got home just in time for it to start raining.

If you’re looking for a fun afternoon activity, Tampa mountain is where it’s at 🙂 I spend a lot of time looking up at Tampa which is a beautiful view, but It’s nice to get a different perspective. 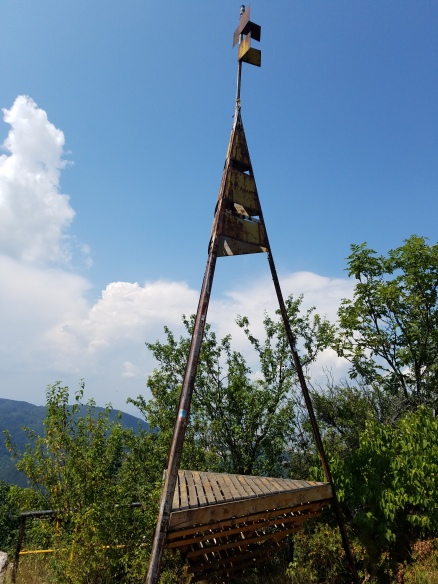