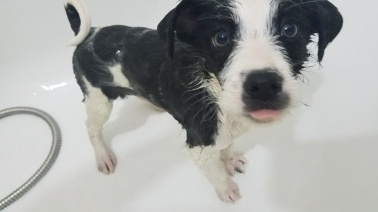 I think back to when I first started researching Romania (I think this was March 2015), and one of the first things I learned about this country is that there are a lot of dogs here. Specifically, stray dogs.

I was warned on many websites to watch out for the packs of stray dogs in the cities and this information completely colored the way I thought about dogs in Romania. I refer back to my vocabulary activity that I did for dogs – you can see that even then I associated the word “câine” with rabid packs of street dogs.

Culturally, in America, dogs are seen as family members. They live inside. They sleep next to you in bed. We dress them in clothes. Some lucky dogs get to travel with their owners on vacation and adventures (I’m looking at you, Louis). We consider them when we make our big life choices.

However, I have learned some things about dogs in Romania. I was surprised to discover the way that people view dogs here. Here, it’s a bit different. I quote my Romanian friend who said, “In Romania, dogs don’t have so many rights.” Dogs are workers in this country. They herd your sheep. They protect your house. They scare the shit out of you as they hurl their bodies, barking viciously, against the house gates as you walk down the street.

And some Romanian doggies don’t have any job or home. Some are abandoned. Some are abused to an incredible degree.

That’s why Care for Dogs Romania was created.

Delia Botea, the founder of the rescue mission Care for Dogs Romania, is a saint. She has devoted her life to saving these dogs, giving all her time and money in the hopes that she can help these dogs find safe, loving homes.

When I moved to Brasov, I tried to find some volunteer opportunities. I knew I wasn’t going to be working as much, and I wanted to spend my time in a more worthwhile way than just laying around the apartment. I reached out to a few groups, but they either weren’t interested, or they wanted me to pay to volunteer my time.

But not Delia – she was friendly and welcoming and appreciative of any help she could get. Care for Dogs is a labor of love that runs because of her leadership and the wonderful people in the community who routinely come to the dog shelter to give their time and skills.

Dogs that were found with broken legs, parvo, mange, you name it – are rehabilitated through this organization and are adopted all over Europe. Delia is well-connected with several other rescue centers and together, they use social media and their connections to find forever homes for these animals.

We were lucky enough to be able to foster a puppy for a few weeks this summer. Laika was found with her brothers and sisters in a trash pile outside of the train station. The saddest thing about this story is that people didn’t seem to care that these babies were in the pile and they kept throwing trash on top of them. Delia rescued them but because they weren’t vaccinated yet, they couldn’t be allowed around the other dogs at the shelter. So we took Laika until she could get her shots and develop enough resistance to give her a chance at life.

When they found her, she was brown. They had no idea she had white fur. That’s how dirty the conditions were for these sweet puppies. After a nice flea bath and a good meal, Laika settled in easily in our apartment. She was very interested in laying on all soft things – blankets, pillows, me. She was so excited to see us when we woke up in the morning and gave sweet puppy kisses when we petted her. I seriously can’t believe that this precious life was almost extinguished because of the apathy of humans.

Laika’s first night with us

One of her favorite spots. Look at how much she grew!

Our dog, Louis, was not very receptive to Laika. He was used to being an only child and wanted nothing to do with her, despite her attempts to get his attention. Eventually, he started displaying some serious stress symptoms like chewing on his paws and shaking whenever she came around. I became especially concerned when he stopped eating. 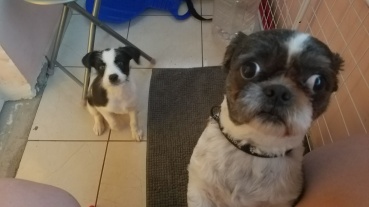 Louis was not up to the task of mentoring a puppy

I hadn’t realized what a life change it would be for him and in the interest of his health, I asked Delia if we could bring Laika to the shelter. She had had the opportunity to have her vaccines and build some immunity, so Delia agreed that it would be alright. I’m happy to report that after a week, Louis is back to his old self.

Delia is continuing to expand her efforts in the Brasov county area by purchasing land and building a larger dog shelter all with her own money. If you’ve read this far, I would like to ask you to please watch her video about the shelter and her plans and consider donating money. Keep in mind that the US dollar goes very far in Romania – it’s a 1:4 exchange rate usually. Delia spends about a 1000 lei a week on food for all of the dogs (there’s about 70 of them!), so imagine if you or your organization, club, or community donated just $250 – you could feed these dogs for a week.

…and here is the video of her describing the shelter that she is building for the dogs:

As far as I know, Laika is still available for adoption. There is an adoption fee to help cover costs, but you can message Delia through the Facebook page for Care for Dogs Romania.

2 responses to “Caring for Dogs in Romania”