Despite being in Romania for almost two years now (wow), I had never had the pleasure of celebrating Easter here. Last year, we were in Venice for the holiday and we missed everything. I was very glad that we’d be with family this year since we are leaving soon.

Since I’ve been here a bit, I’ve started to feel pretty acclimated to most traditions and celebrations, but I have to admit that Easter took me by surprise a bit. I was expecting it to have a lot more in common with what we have in the States, kind of like how Christmas is almost the same. But I learned that in Romania, Easter is ~the~ holiday – and way more important than Christmas.

The preparations for Easter begin for many Romanians days in advance. Many people here keep what is called “Post” – a vegetarian (and more often, completely vegan) diet for the forty days before Easter. In America, this tradition is called Lent, but in my experience, people give just one thing that matters to them up for Lent (Facebook, sweets, or alcohol, etc.).

So when Easter rolls around, the people who have kept Post are really ready to dig in for a giant meat-and-egg-and-cheese filled extravaganza. I did not keep Post, but I respect the people who do.

Easter for me, in general, is more of a family holiday rather than religious, but I was very excited nonetheless to participate in all of the festivities. We arrived in Zarnesti on Saturday, ate a giant meal, and drank wine as we waited to go to the church at midnight.

One of the most important things that happens on this holiday is the light from Jerusalem. A priest goes into Jesus’s tomb and emerges with a lit candle that lights other candles and can be taken all over the world. The light arrived in Romania around dinner time on Saturday and traveled its bright little self up to the village of Zarnesti so that everyone could receive it at church.

At the stroke of midnight at the church, the priest declares that Jesus has risen and everyone in the church lights their candles from this light and brings it back into their homes. 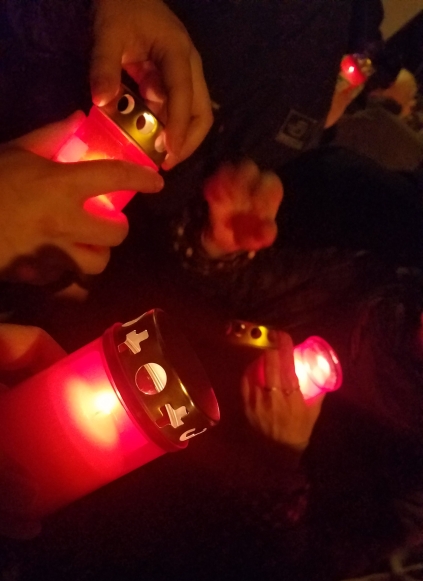 The next morning, everyone wakes up and has a giant breakfast that includes lots of eggs and drob. I will talk more about drob in a second, but first I want to tell you the weirdest thing that happened to us at breakfast.

In Romania, they dye the eggs just like we do in the States (except here they’re mostly red), but then they play a game with the eggs. Two people each take an egg and then they take turns cracking them against one another. The first person will say, “Hristos a inviat” and the second person says, “Adverat, a inviat” (Christ is risen – truly, he is risen). After you crack the eggs, the winner is the person whose egg didn’t crack.

This is not my video, but you can see here how it works with the sayings:

From a giant bowl of eggs, we were the only ones at the table to get the double yolked eggs. What are the odds? I googled it, it’s like one in a million. Too bad the lottery was closed on Sunday.

Okay, on to drob. Drob is…interesting. I did not try it (and usually I am okay with trying new foods, but this fell into the category of “nope” for me). It’s basically haggis made out of lamb. Like, entrails are required. Yep.

For many, drob is the best part of Easter. I know because my fiance had been talking about it for weeks beforehand.

After our giant breakfast, we laid around in the sun drinking wine. It was truly a magnificent day after five months of winter. I forgot myself a little and received a pretty nice sunburn. You forget how powerful the sun can be when you don’t see it for months on end.

Other amazing things that happened:

Easter Desserts. Pasca, specifically. Pasca is kind of like a cheesecake and can be made in many different ways. The traditional way is with a sweet cheese and raisins, but Claudiu’s sister brought a chocolate one that was possibly the best thing I’ve ever eaten.

Cozonac. Made by Grandma. Cozonac just makes every holiday so much better. Also, Grandmas are just awesome.

I met a chicken. She had fancy feathers on her feet and she let me pet her. There was a turkey there, too, but he wasn’t as friendly. 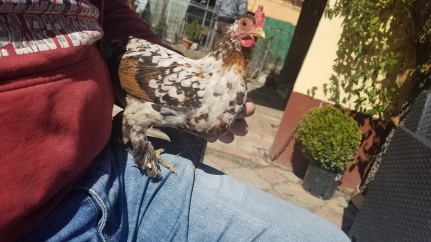 The chicken and her boyfriend

Martisor. I made sure to tie my martişor on the tree (next to the one from last year) for good luck. This will be my good luck tree.

I think we really needed this time to relax and spend time with family because now we have to pack our entire apartment and finalize everything for our move to the United States 😀 Hopefully, the luck of the martişor will be with us!